Deception Pass, Thursday September 10th. Another current cycle when the Low Tide is higher ( even if for only a little bit) than the High Tide.
The skies were still blue, the wildfire smoke nightmare arrival was still only in the forecast for our island... 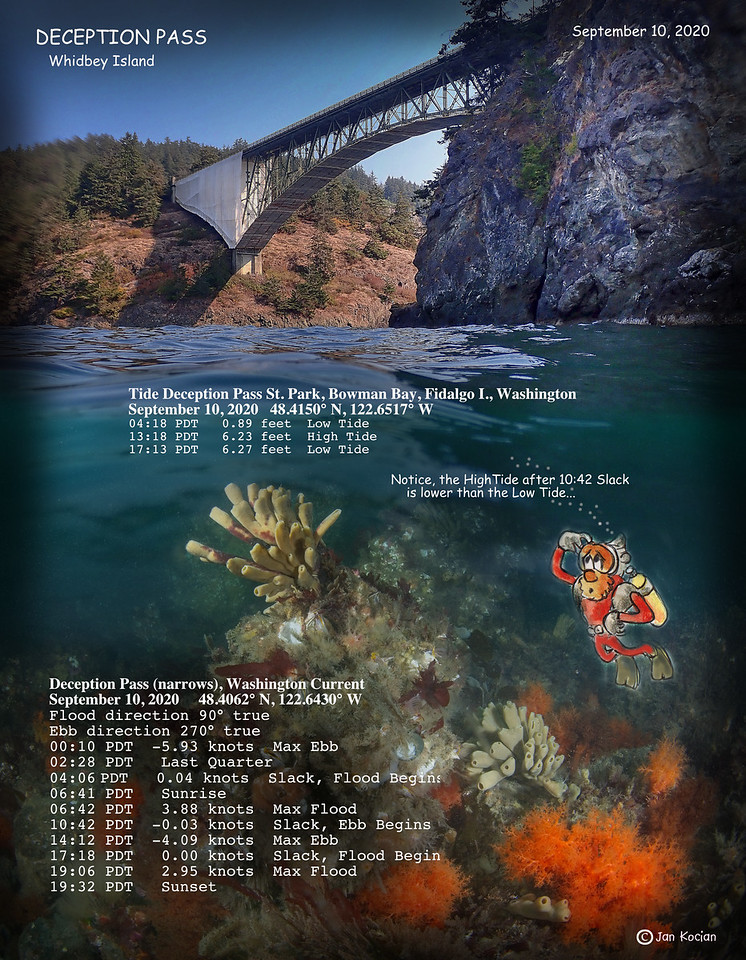 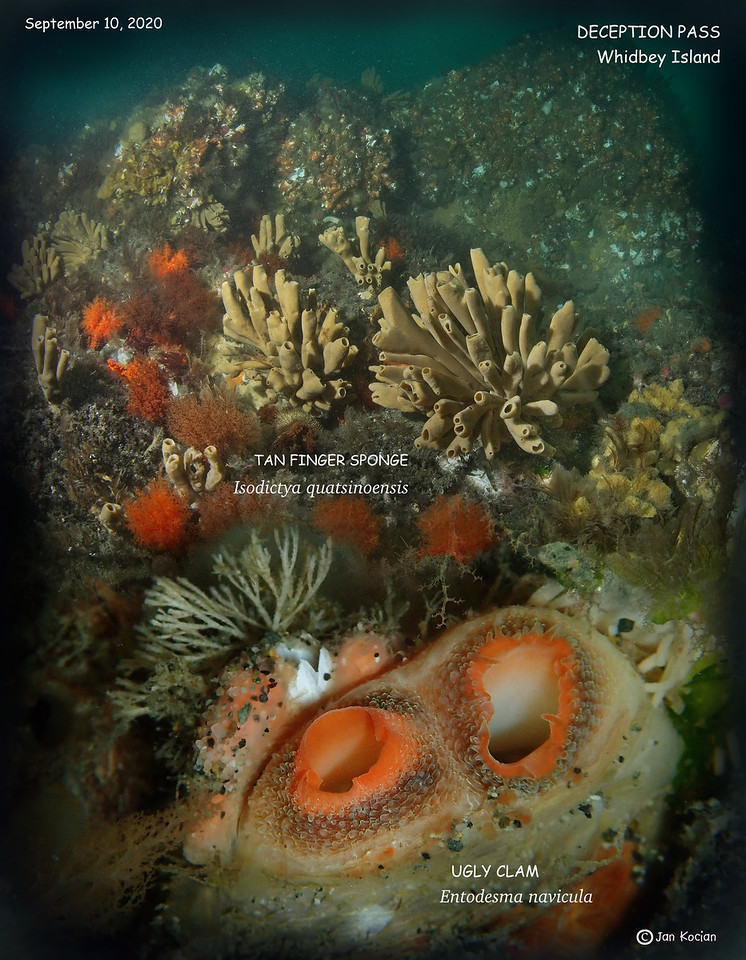 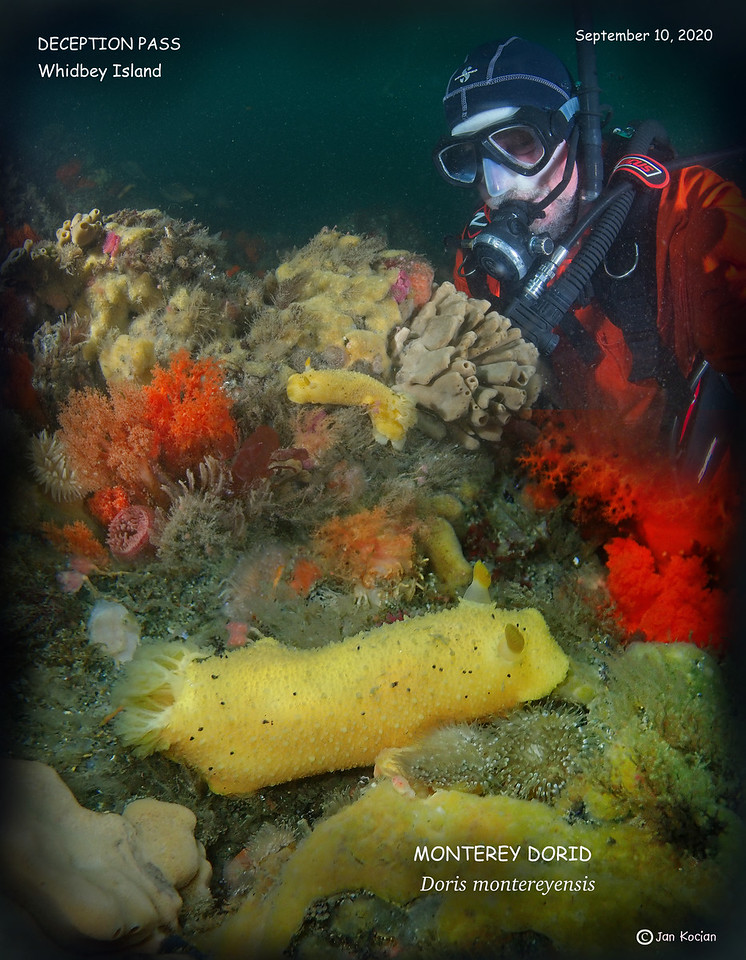 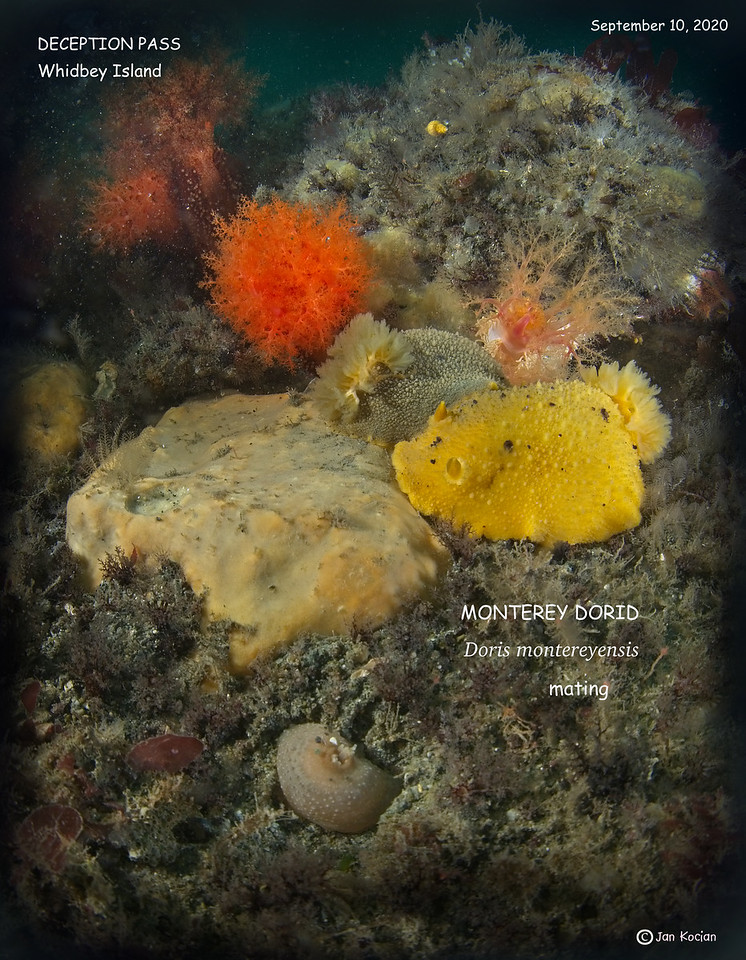 Few more from the Pass. Not much of big fish, Plenty of Scalyhead sculpins and juvenile Mosshead warbonnets.
Few starfish, fortunately still healthy. 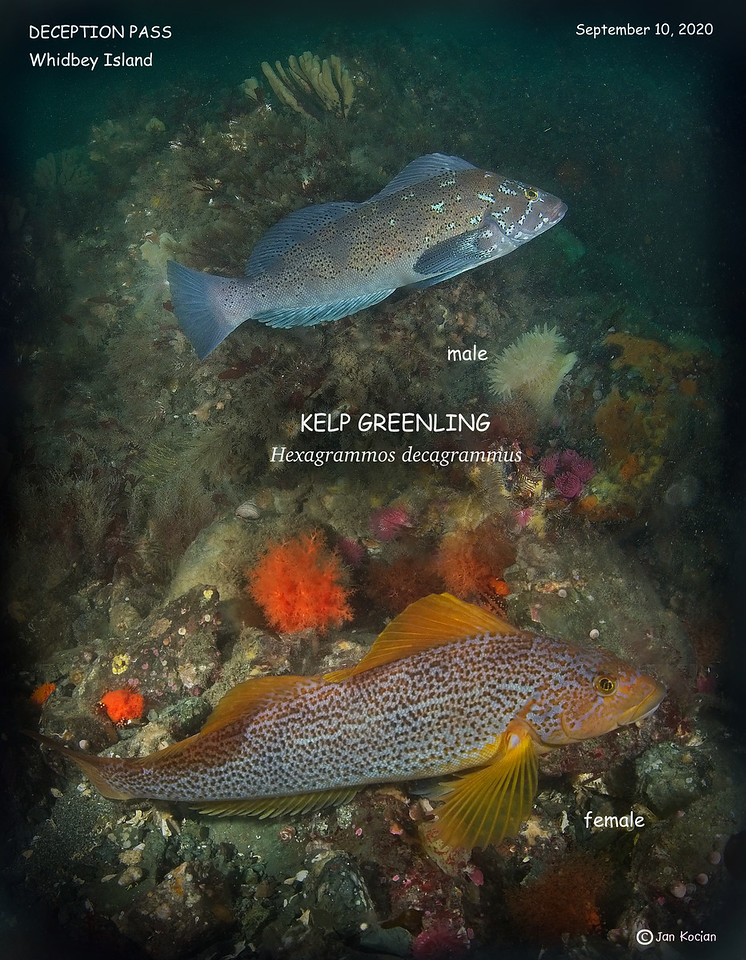 Jan: I tried to explain the seeming disconnect between tides and currents to a physicist friend by drawing pictures when he interrupts, "Water builds up behind the pass. It acts like a capacitor. The same solution to differential equations apply to fluid flow and electricity. I get it." Obviously, his understanding was deeper than mine.
-Curt

p.s. No big fish, but still lots of stuff to see.
Happy to be alive.
Top

Thank you for your input. Interestingly, the same situation with tides happens also BEFORE the slack.
http://JanKocian.smugmug.com
Top

As if the smoke and Covid -19 were not enough, wasting sea star disease started in earnest again at Langley Harbor. It is the only place where sea stars are really present in great number. At the moment, majority of them are still healthy, but the dive on September 1st was not a good sign. The Sunflower star juveniles which were such welcome sight were showing first signs of wasting... :(

Langley Harbor revisited on September 11th. Did not find any Sunflower stars, and wasting continues. It is interesting how the Ochre stars move around, preferring the top of the H-beam, more of them now than ten days ago... Number of ratfish to keep me company. 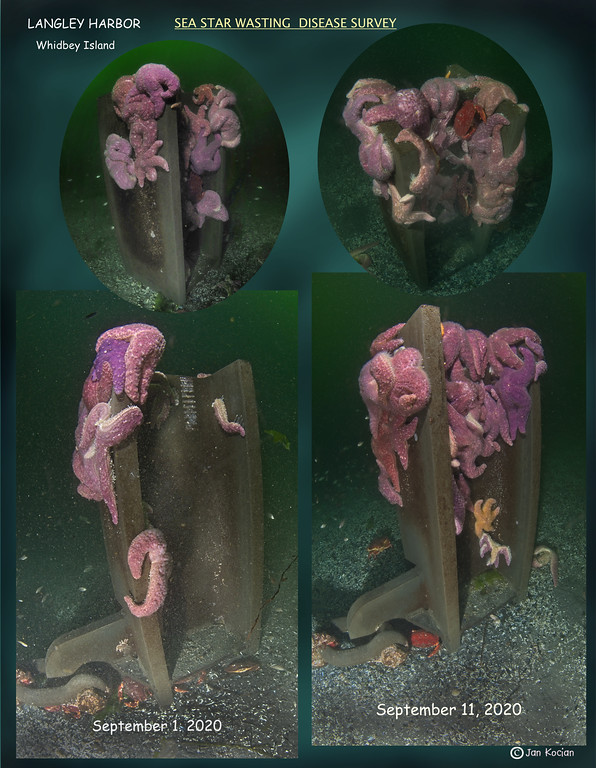 Seeking a reprieve from the smoke filled world around me. Keystone Jetty, September 16th. Little bit of everything. School of fish, and watching locals dine outside their homes. Dorid enjoying some sponge, Scalyhead crunching dow a Porcelain crab (thank you Greg Jensen for IDing the unlucky crab) and Helmet crab working on its escargot snack... And meeting Pat, kindred soul in the search of the same. 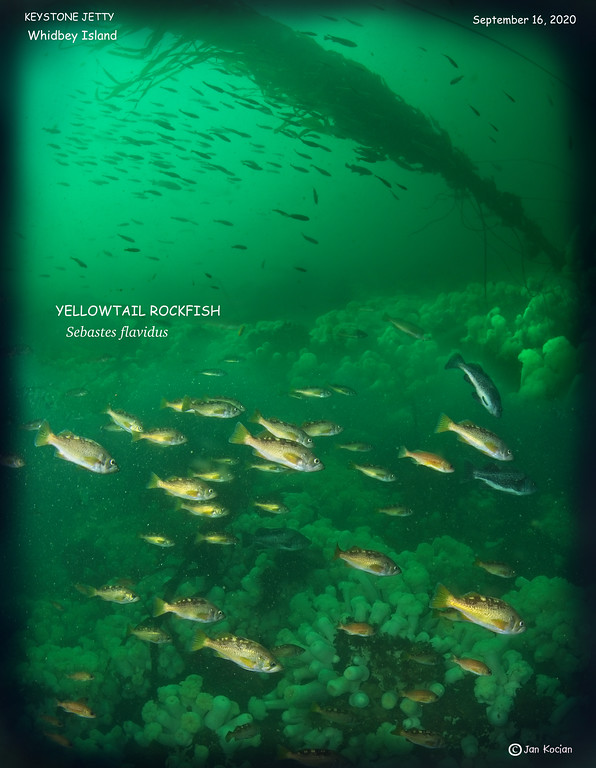 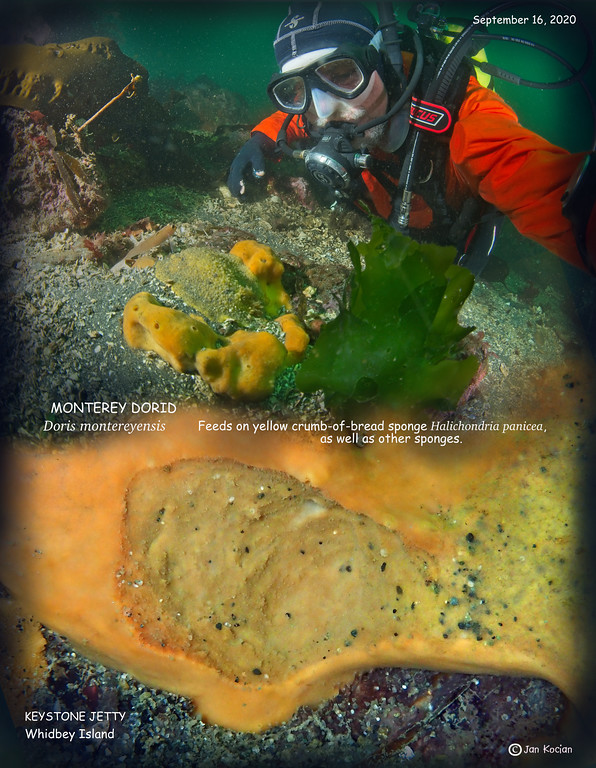 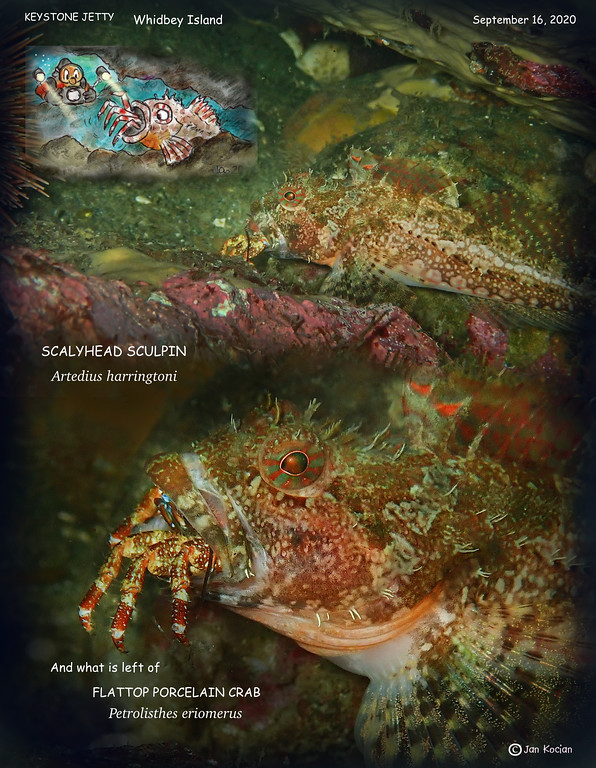 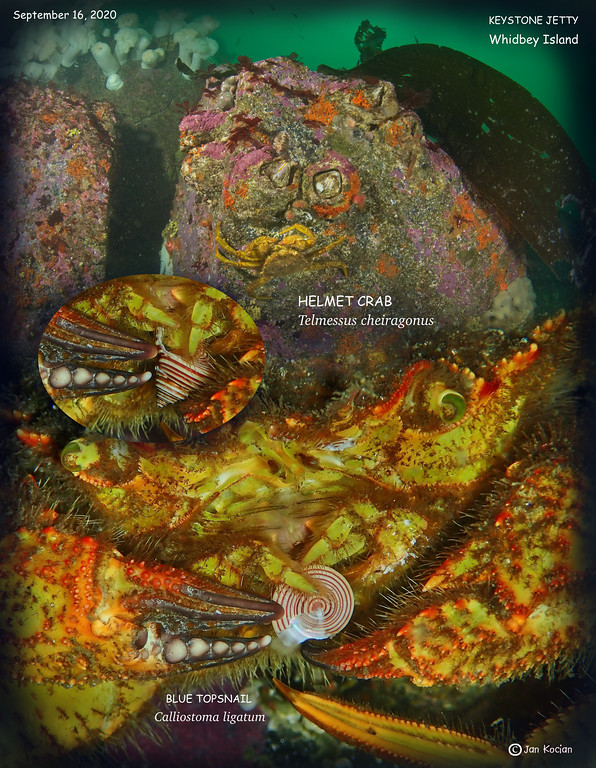 Lagoon Point September 17th. Adding new critter to my list is always exciting, regardless of its size or beauty.
Spiny lebbeid shrimp probably doesn't fit into the WOW category, but it sure made my dive worthwhile. 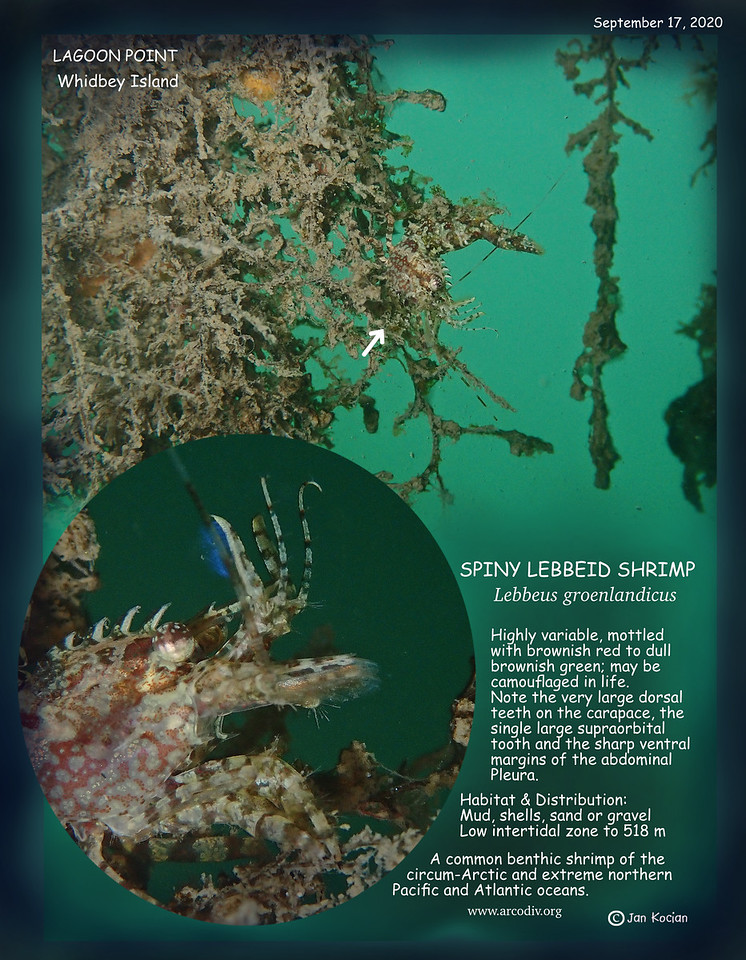 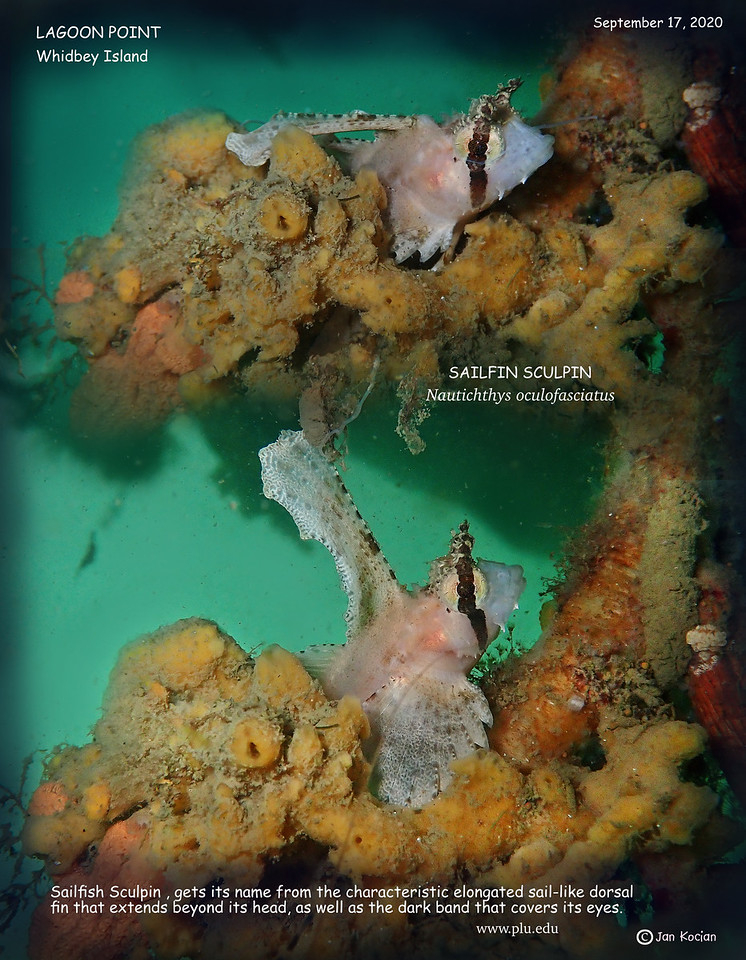 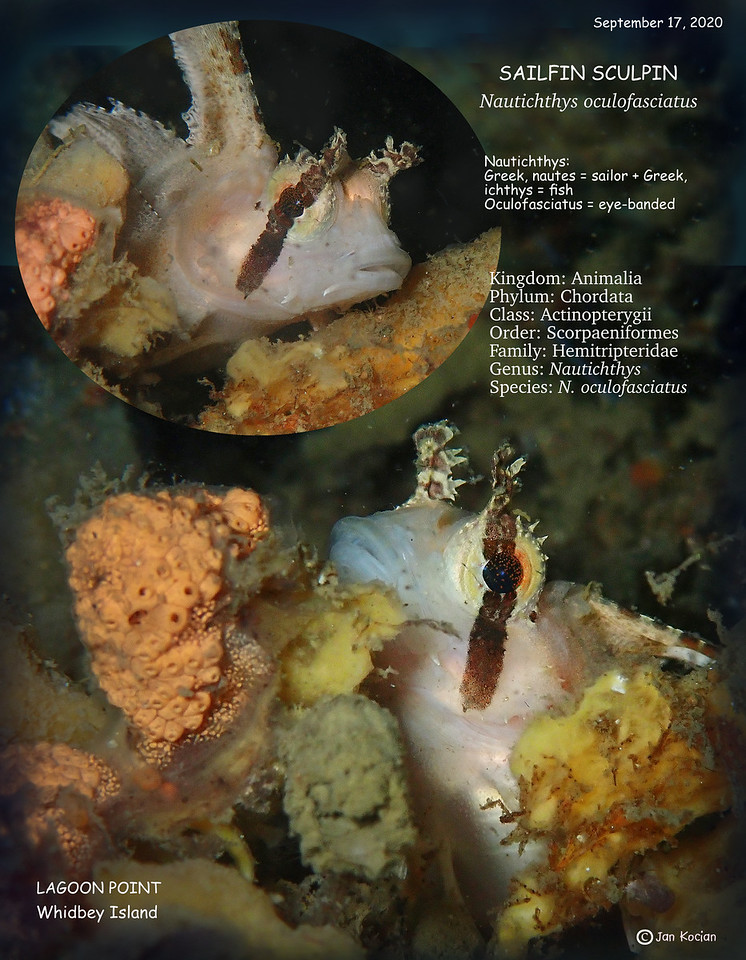 Reading the habitat of the shrimp, I suspect that you are among the few divers to have seen it. Diving Lagoon Point is not as unusual as the Driftwood ponds, but it certainly doesn't rank as a popular dive site. I cherish your search for the unusual. I enjoy the sailfin sculpin as well. i remember their hanging upside down on the bottom of Hundred Foot Rock.
-Curt

Thank you Curt, but it sure is getting harder and harder to find new critters...

Keystone Jetty Sunday 20th. Some of the divers and critters I came across.
After the smoky week, beautiful sunny day above and under. 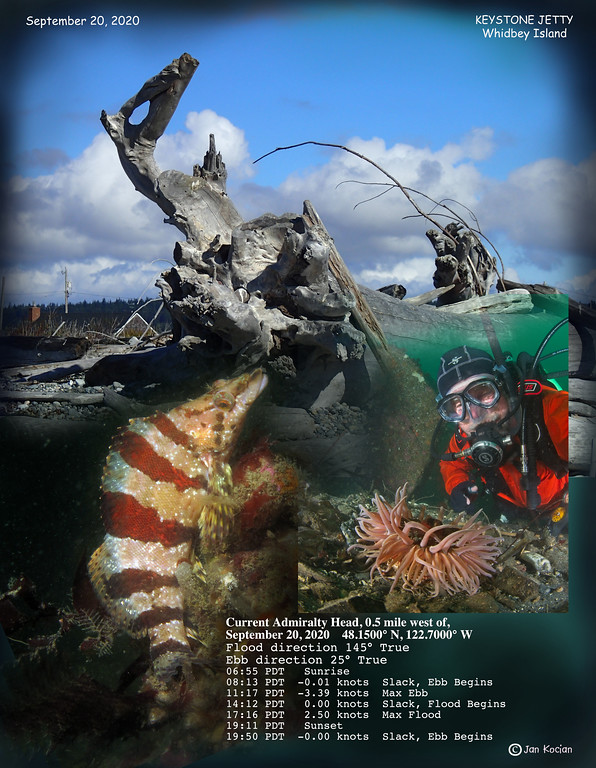 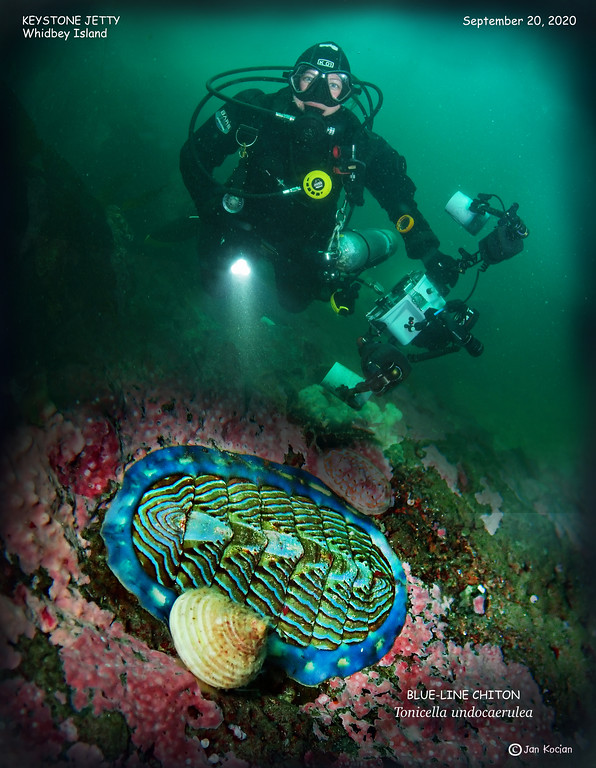 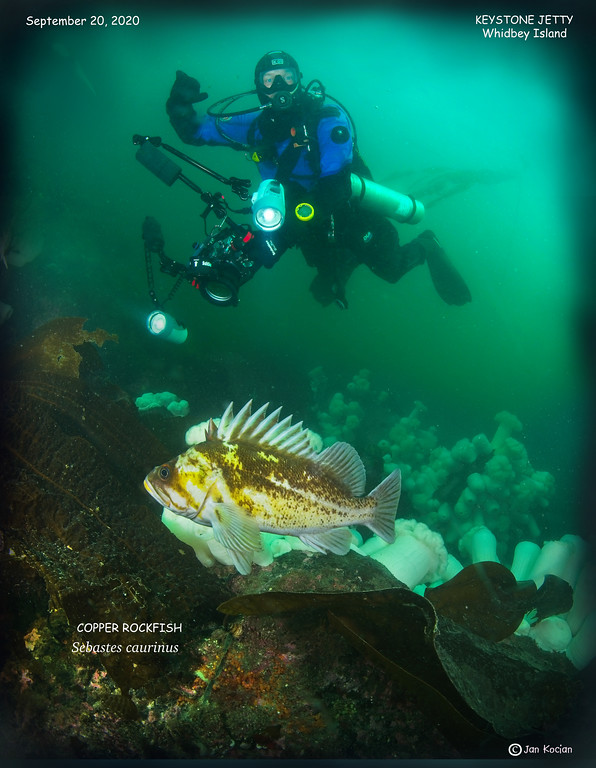 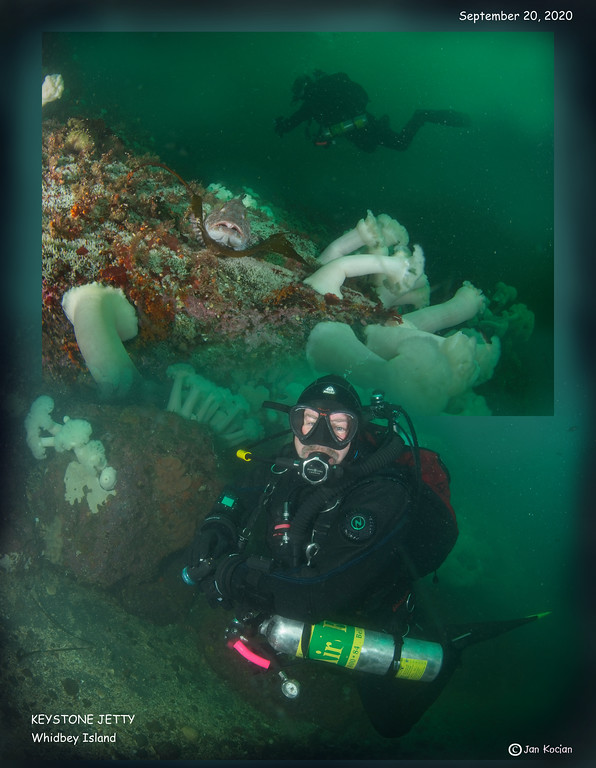 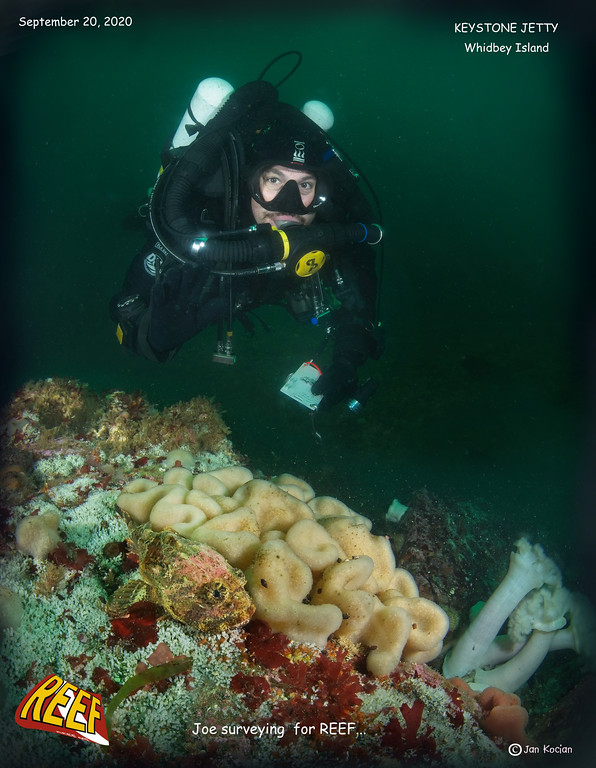 And some Sunday Keystone fish encounters... 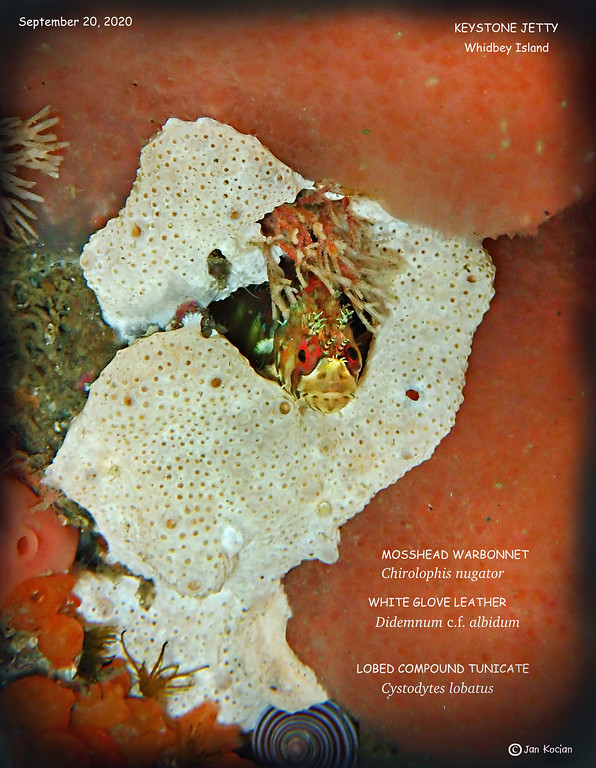 September 20&22. Keystone Jetty Lingcod getting their health check done by Scalyhead sculpins. In the past it were the large Lingcod, but this time the three fish opening their mouths as to advertise for the need to be cleaned were smaller animals. 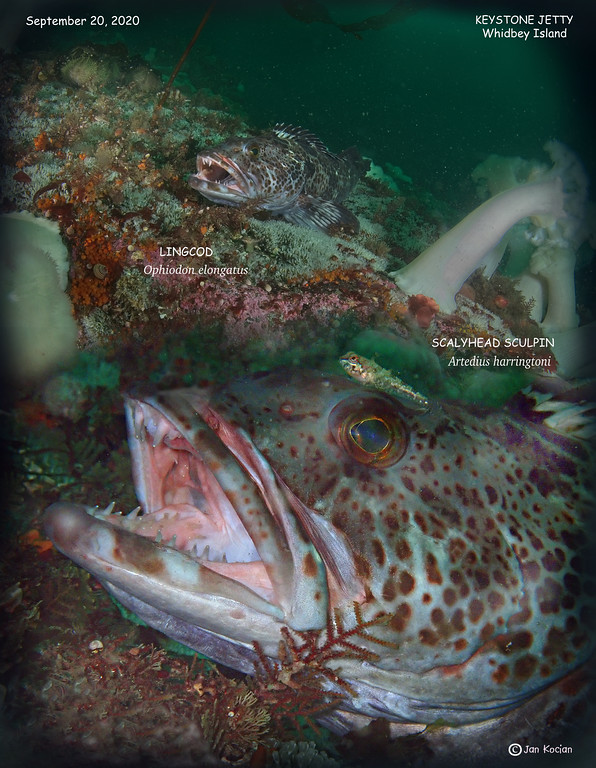 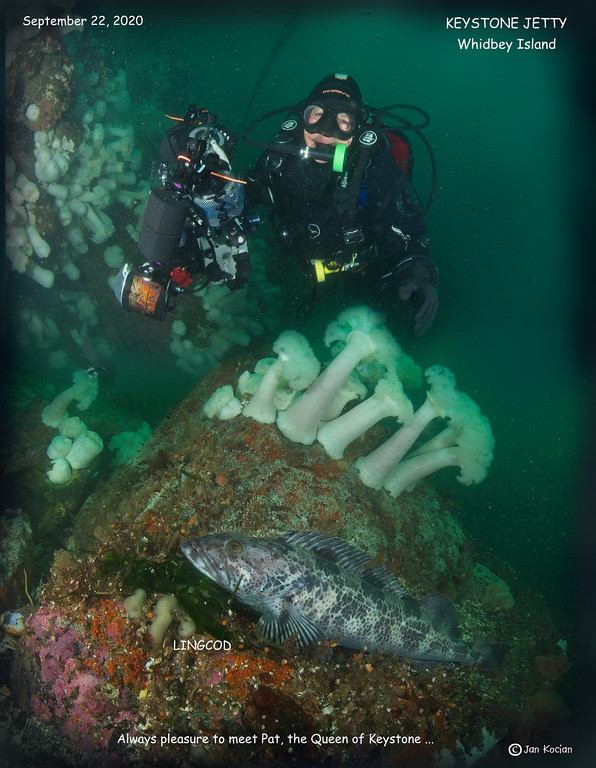 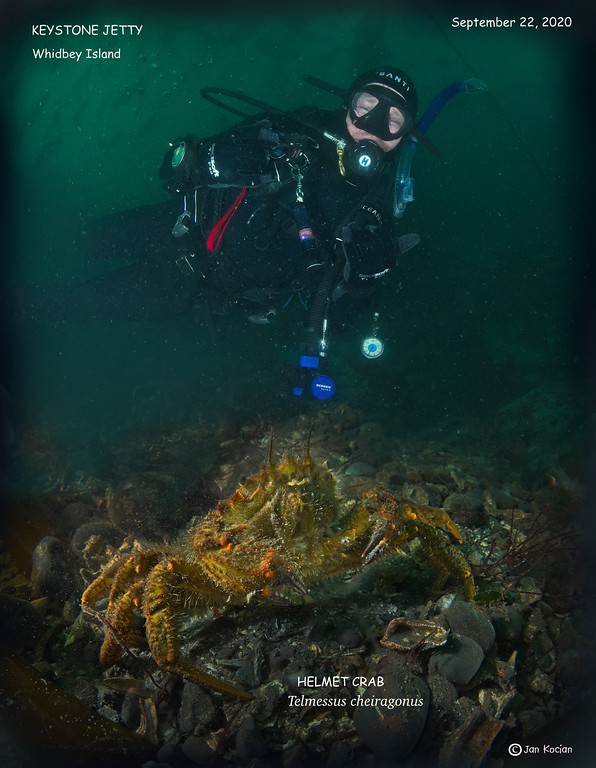 As some of you know, I have been following the tragic and mysterious story of wasting sea stars from the beginning.
When it hit our local waters around Whidbey Island, I joined many other citizen scientist in providing sighting and information to scientists involved in trying to find the cause of this in its scale unprecedented die off. After lots of research it
it was thought that densovirus was the culprit. However, after more testing and observation, that did not explain some of the issues, so the search for answer continued. The new findings shined new light onto the causes.
On resent dives I see resurgence in the wasting of many sea stars and so the issue is unfortunately still IMHO a hot one. 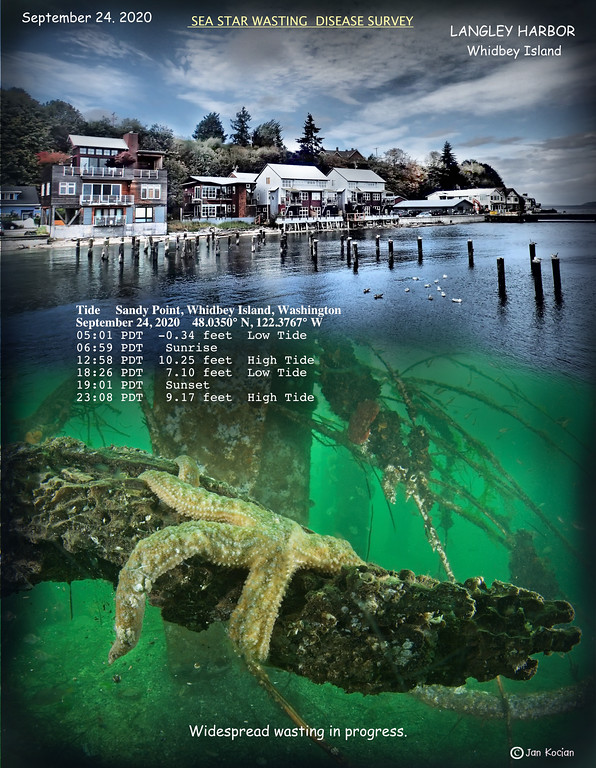 Congratulations on taking part in such an important paper! It took me quite a while to get through it (what with shuttling back and forth to Google in order to figure out the terminology) but in the end it seems to tick all the boxes that other papers missed and even explained some things that previous researchers didn't even ask about.
Well done indeed!
Alex
Top

Thank you Alex. My part was just a little tiny one - diving

Skyline September 21st. Meet one of the locals - the Pacific Red Octopus... 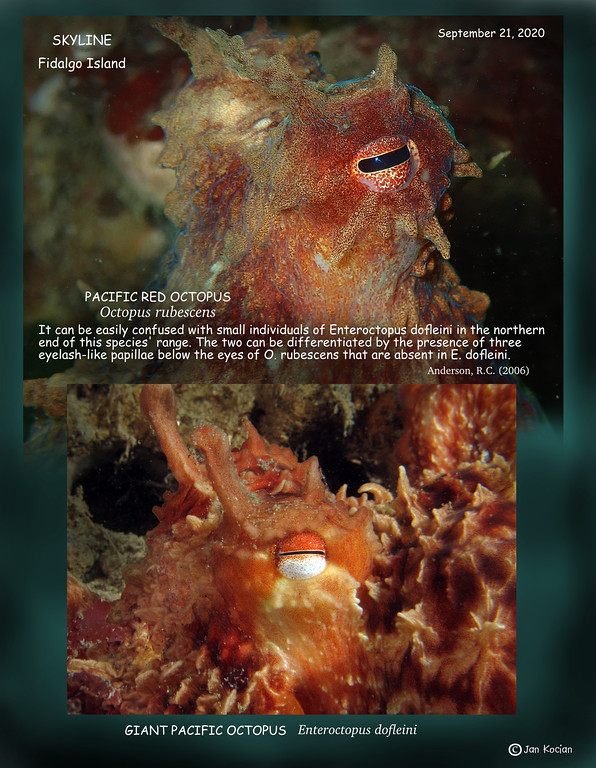 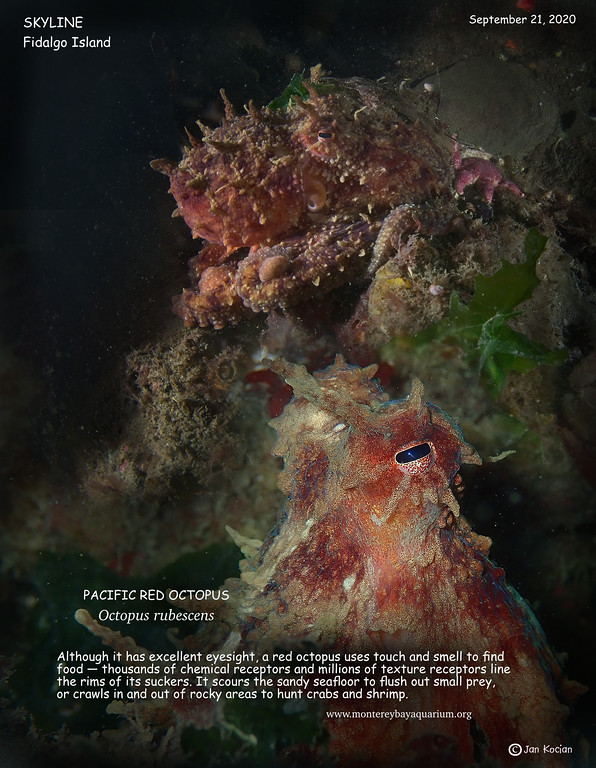 Skyline, September 21st wrap up. Many of the red sea cucumbers seem to stop feeding already and the scenery becomes more subdued because of it. 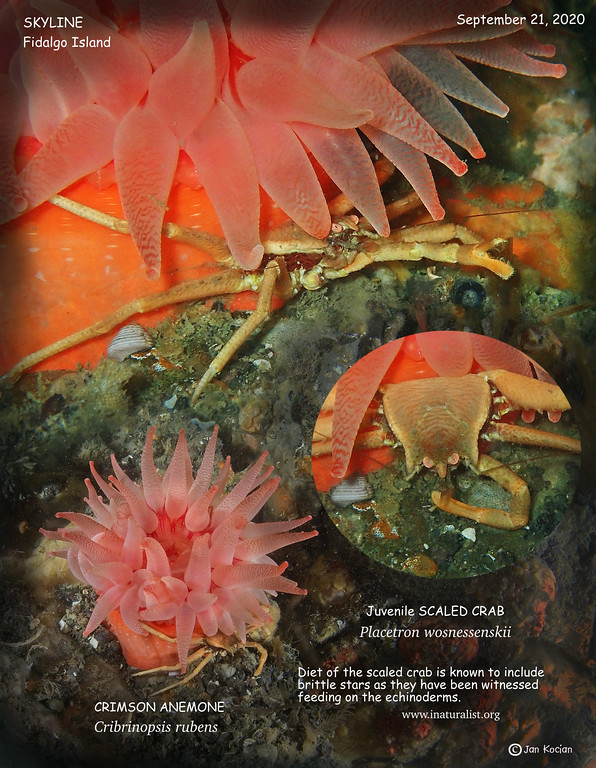 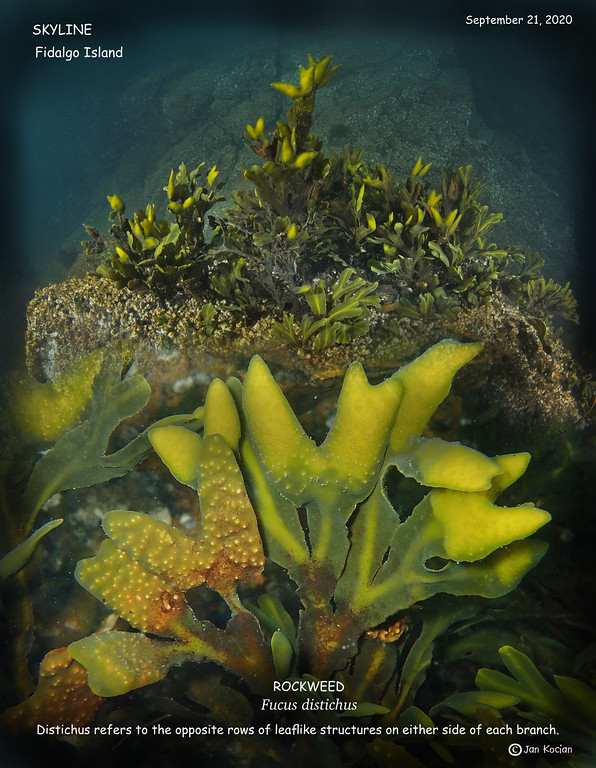 Keystone Jetty September 27th. After the smoke cleared, early morning dive with beautiful sunrise was added reward.
It is already October and I am not finished processing September pictures. And getting ready for another Keystone dive... 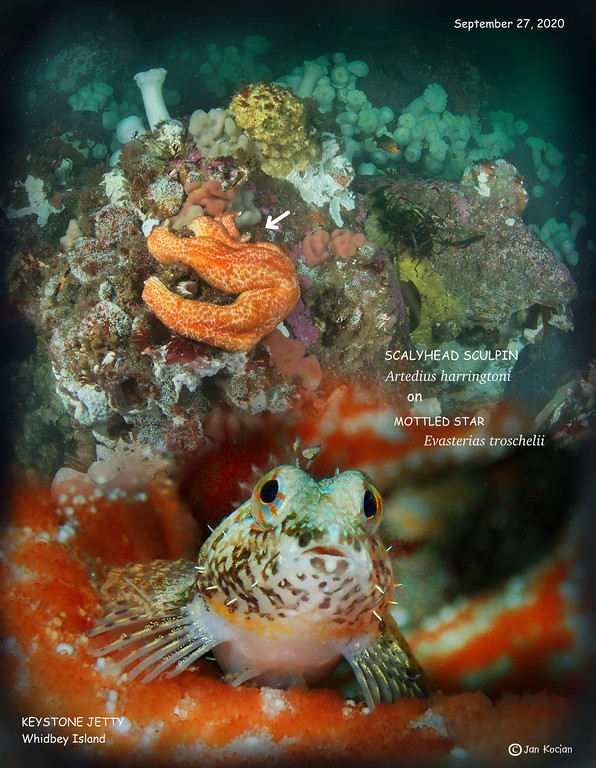 October 1st. Keystone Jetty. Foggy above, good visibility below.
And after many, many months, I come across healthy, large adult Sunflower star!

The days lately are all wrapped in fog and gray color. But that doesn't mean we can't continue diving.

Manacled sculpins are supposedly common, but I sure did not see many . Actually, Scuba Jess found one few days ago and I was lucky to find one soon afterward, on October 2nd. So keep your eyes open and camera ready. Once you spot one, they lets you click away, they don't seem to be too skittish... 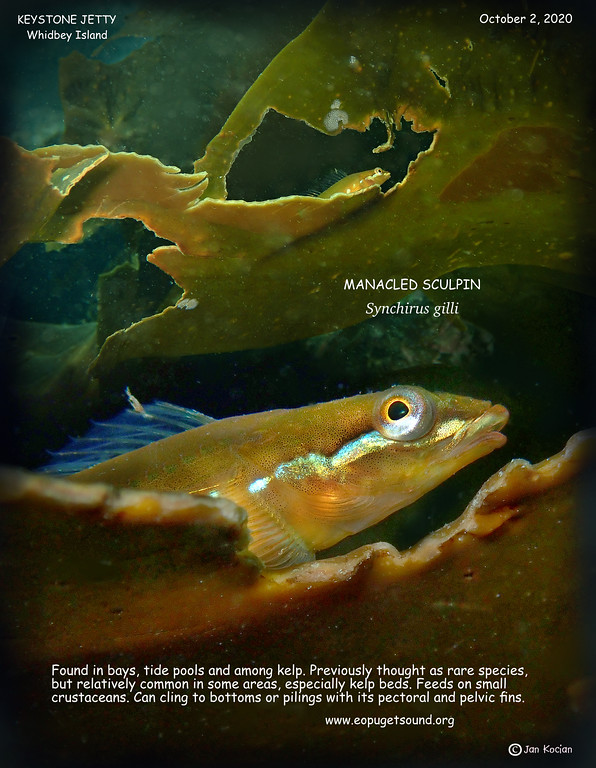 Keystone Jetty October 3rd. I don't know if the parasites pestering the local Lingcod are more numerous, but I noticed that these days many more Lingcod are calling for Scalyhead sculpin cleaning services ... 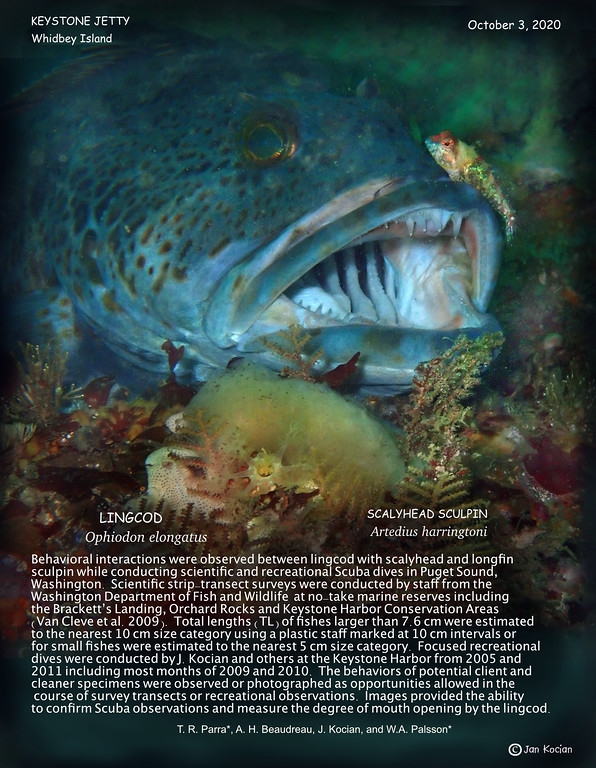