I noticed new wasting at Redondo this week. :(
Jenn
Top

I've noticed quite a few at Mukilteo ranging from very small (hand size and smaller) to giant ochre stars in the crossed-leg stage. A good number already wasting into nothing.
-Erika
Top

Thank you for that report Erika, the scientists send their regards and truly appreciate the continued diligence. Dr. Ramondi asks if we could keep our eyes open for any signs of stress in the green urchins that have moved in. There has been some wasting disease seen along the coast in them as well.

Additionally if there are anecdotal thoughts with regards to species density in other critters don't hesitate to mention, every little bit of data helps. I feel like I saw fewer nudibranch's in the mid sound this spring/summer so far, and have been finding baby green urchins up in the intertidal zone at multiple sites (they are under rocks and things). It would be great to hear what you guys are seeing/experiencing as well.
----
"I survived the Brittandrea Dorikulla, where's my T-shirt!"
Top

Wasting continues at Langley.
Did not see any at Keystone or Deception Pass.
Maybe because sea stars are so rare now there, at least comparing to Langley and before the SSWS hit.

Yup... saw wasting in the mottled star at Cove 2 tonight :( Plus all the green urchins have moved on.
----
"I survived the Brittandrea Dorikulla, where's my T-shirt!"
Top

Is something starting to hit the sea cucumbers? Saw one yesterday at Redondo that looked terrible. Its mid-section was white and waste-y looking. I really wish I'd had my camera with me...
Jenn
Top

Thats the first report this year, i saw one that sounds similar last year.
----
"I survived the Brittandrea Dorikulla, where's my T-shirt!"
Top

I saw several wasting stars at Redondo on Sunday. I'm forgetting what type they were, but they were pretty well wasted.
All underwater photographs of mine are posted at http://www.dereksinger.com
@dereksingerphotography on Instagram
Top

Look what I found on the Mukilteo Clay Wall last night at 10pm. Excuse the picture quality. There was actually 2. This one was maybe 16'' in diameter, the other maybe twice the size of my hand.
-Erika
Top 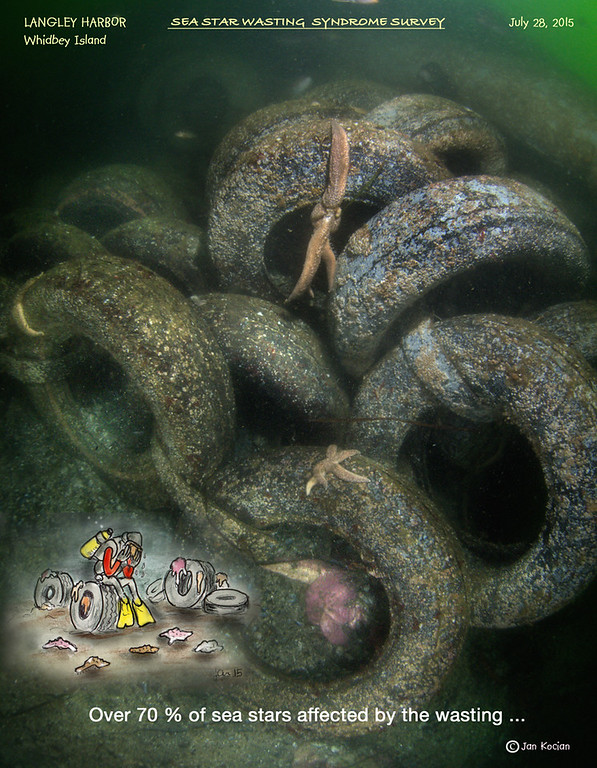 One healthy-looking small purple star out in the tidal flats on the south side of Point No Point Sunday. We tucked him under some eelgrass in a tide pool to keep the kids playing on the beach from seeing him. About 5-6 inches across.
<Penopolypants> "I, for one, would welcome our new cowboy octopus overlords."
<LCF> "There is ALWAYS another day to dive, as long as you get home today."
Top

Another wave of dying for Coupeville, just as it was recovering from the last year's assault...

I thought I could add to this thread by checking tidepools on Sucia Island I have been visiting for over 40 years. I did so on Aug 11 at a -0.6 ft. tide. When I first arrived I saw no seastars and thought that I would report as an experienced observer that seastar wasting had hit Sucia Island. Then a 10 year-old girl shouted, "We have lots of starfish over here!" In fact we saw between 40 and 50. All Pisaster, all seemed healthy.

-Curt
Happy to be alive.
Top

We saw many dozens of healthy, 5-armed ochre colored sea stars (apparently all the same species) in Townsend Bay today. Only one partial star (wasted?) was found. Average depth about 30 ft. Very encouraging! However, I saw only one sun star, a baby, in the same area where normally I would expect to see more.

Seems like the stars are making a comeback in Cali.

I haven't been diving as much as I used to, and it was at least 6 months in between my last two dives at Mukilteo, but it certainly seemed like there were more stars around last week than I had seen in a while. Still no sun stars though...
"Screw "annual" service,... I get them serviced when they break." - CaptnJack (paraphrased)


"you do realize you're supposed to mix the

with water and drink it, not snort the powder directly from the packet, right?

A number of folks have been asking about Seastar Wasting syndrome, what’s up with it (since our stars have not yet recovered and still show signs here and there) or post necropsy sharing the KCTS9 article where they mention having found the cause that is from a few years ago. One of the primary researchers shared this on FB yesterday so its the closest thing we have to a real time update.... Read his full post below.

Four years ago I published a paper that identified the sea star associated densovirus (SSaDV) as the best candidate culprit for sea star wasting disease. At the time my father fought a rare condition called “myelodysplastic syndrome”, which is a heterogeneous group of diseases that manifest with similar symptoms. Often in biology and science it is easier to describe common signs and observations as a single condition, to seek out one explanation for that phenomena. It is easier to explain, easier to spark public interest, and easier to change its outcome in the future. But biology is seldom easy - it is usually highly complex. Myelodysplastic syndrome made me aware that sometimes there are multiple conditions that resemble the same disease – which is made even more valid a possibility when one considers the relative simplicity (in terms of responses) of sea stars to stress. In short, how many ways can a sea star tell us that they’re unwell?
After 4 years of investigation by some of the most dedicated and awesome grad students, undergraduate assistants, technicians and citizen scientists I have worked with, we have found great difficulty in replicating “sea star wasting disease” in the lab. When we first found SSaDV hiding in viruses that inhabited sea star tissues, we had little clue that densoviruses are pretty diverse and routinely found in association with sea stars. Refining our observations to potentially exclude similar densoviruses that we hadn’t seen necessarily associated with any wasting demonstrated that SSaDV wasn’t in any clear way associated with wasting disease in species other than the one for which we had a pretty firm case in 2014 - the sunflower star, Pycnopodia helianthoides. Our previous observation of SSaDV in historical samples from 1942 to present also was not confirmed by this new approach – densoviruses observed in wasting sea stars were only seen from 2013 to present. Further analyses of other potential factors (which is by no means exhaustive) both pathogenic and climatological failed to yield any single or even potentially combination of factors that explained the occurrence of SSWD amongst all species in which it has been observed. In the absence of any explanatory variable or combination of variables to explain the entire disease, the logical explanation is that SSWD is probably not a solitary disease, but rather a syndrome of common disease signs between species, and even amongst the same species at different locations - in other words, it's different things between species and between places. SSaDV remains our prime candidate associated with wasting in sunflower stars – but the same cannot be said for other commonly affected stars, like the ochre star Pisaster ochraceus, or mottled star Evasterias troscheli.
Hence, we propose the new scientific title for sea star wasting disease: Asteroid idiopathic wasting syndrome. Asteroid means sea stars. Idiopathic means that it arises spontaneously and is caused by unknown factors. And syndrome means a series of correlated disease signs.
This new paper can be found in the journal Frontiers in Marine Science at:

Thanks for the update, LJ. Sad that our seastar populations are still under such pressure.
My Recent Photos
Top

That fantastic to hear, and I hope it's the start of a large scale rebound!
My Recent Photos
Top

Diving between the T Dock and old fuel pier location in Mulkiteo today we saw lots of wasting mottled stars. I didn't even try to count but I’d put the number well over 50. I haven’t seen this anywhere else recently so hopefully it’s just an isolated location?
Party underwater
Top
Post Reply
275 posts