Tell us your tale of coming nose-to-nose with a 6 gill [--this big--], or about your vacation to turquoise warm waters. Share your adventures here!
Post Reply
11 posts • Page 1 of 1

Earlier this month, I headed up to BC to dive with the steller sea lions at Hornby.

Getting there was as much an adventure as being there. My trip started Sunday, and my original plan was to catch a Saturday Nanaimo ferry to give myself some slack. All Saturday ferries were canceled because of high winds. Then it started to snow. The drive up to Tsawwassen wasn't bad. The roads weren't very icy. But 5.8 kms from the ferry terminal, traffic on the highway came to a dead halt because of a bad traffic accident. During the two hours it took to move half a kilometer, I had missed the last ferry that would allow me to catch the day's last ferry to Hornby. I managed to get off the highway, turn around, drive through Vancouver to catch the other ferry to Nanaimo, and grab a hotel for the night. Then I had to get up at 5 AM, drive in the dark through snow on the one highway lane that wasn't totally iced over, and catch the first ferry to Hornby so that I could get to the inn in time for the first dive.

That first day went very well. Dozens of sea lions swarmed over all of us. As soon as I descended on the first dive, one had its mouth on my arm. I had forgotten how aggressively curious they are. It had been ~11 years since I last dove with them. Got my fins nipped, my hood tugged on. One grabbed a fiber optic cable from my strobe and stretched it out, but I was able to get him to drop it before he broke it in two. They also like to play with the sea stars and sea cucumbers. Being a more experienced diver, I felt like I was flinching a lot less than that first time and not getting the same adrenaline rush after the first 15 minutes. Two very fun dives overall. 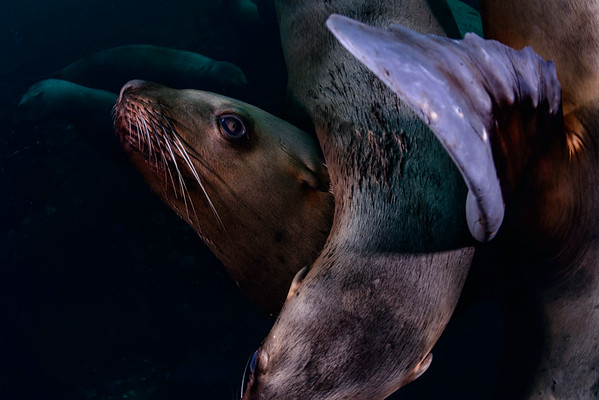 And then it snowed six inches overnight. And then the winds picked up. We managed to get out for 1 dive on the second day, but I left my cap on my lens. So I just spent the dive playing with the sea lions, which was a lot of fun and something I don't regret. Trying to line up strobes and framing can be really distracting. It's nice to not do that once in a while. And then it snowed more.

Winds once again allowed for only 1 dive on my third and final day. But the clouds had cleared. The sun was shining. And the sea lions stayed on the rocks sunning themselves. We had an 80 minute dive and only 1 sea lion got within 3 feet of me, which was as I was ending the dive. Got a great picture of him though! 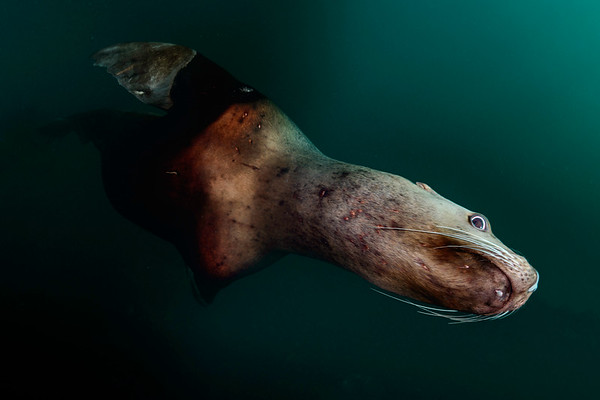 Despite the freezing temperatures above the water throughout the trip and water temperatures between 43 and 47F, I didn't actually get that cold. Being able to change into undergarments in a heated room and short boat rides with very little wind (when we were out) helped immensely. The dives are all at the same site just around the corner from the inn, and you're spending the whole dives at 15-35 ft. There was some mild current on most dives. And the reef is covered in green sea urchins. So it could be difficult at times trying to put some distance between yourself and the sea lions while not letting the current push you too far from the anchor line and not poking holes in your drysuit.

Getting good pictures was also very hard. I wish I had been able to try more adjustments and take more pictures on the second and third days. I think my camera's autofocus had issues with their speed and dark bodies. A lot of what would have been good shots were ruined by bad focus. I was shooting with my 15mm fisheye + 1.4x teleconverter the whole time. I stuck around ISO 640-800 and f/8-11, but when you're at depth on a cloudy morning, backgrounds are still coming up near black. The afternoon and switching to the other side of the rocks provided better lighting, however. A lot of the other people said that they wanted to try more shots near the surface next time to get better lighting/backgrounds. I think next time, I might try a couple different lens setups.
All underwater photographs of mine are posted at http://www.dereksinger.com
@dereksingerphotography on Instagram
Top

Some nice ones in there Derek! Sorry the weather cut into some of your fun! Glad you made it safely!
Yes, I'd think shallower could look better but I hear they get even more what you call it 'aggressively curious' near the surface!
Is the food and hospitality still good up there?
Get out of cove 2 and explore!
Top

Food and hospitality are still very good. Rob and Amanda are great. Really appreciated Amanda's responsiveness over email while I was trying to make my way there.
All underwater photographs of mine are posted at http://www.dereksinger.com
@dereksingerphotography on Instagram
Top

Wow - epic trip just getting there! So glad you had some great dives and got excellent pics and have thoughts of things to try next time. Really like the two sea lions looking up! Thanks so much for the detailed report and sharing!!

Awesome pics Derek! I'm so glad you made it safe and got to dive in the snow. That sounds so freezing. I hope you had some kind of hot beverage

Those guys look so fun and crazy! Was there any macro around or just Sea Lions and urchins?
Live Long And Prosper!!!

A couple sculpins maybe? Wasn't really looking. Pretty sure you could do a night dive off the dock if you wanted, though.
All underwater photographs of mine are posted at http://www.dereksinger.com
@dereksingerphotography on Instagram
Top

ScubaJess wrote: ↑
Mon Feb 03, 2020 7:45 pm
Awesome pics Derek! I'm so glad you made it safe and got to dive in the snow. That sounds so freezing. I hope you had some kind of hot beverage

Those guys look so fun and crazy! Was there any macro around or just Sea Lions and urchins?

I’ve been to Hornby twice in May which is not sea lion time so I’ve done a bunch of the other sites. There aren’t really currents in the area to give it the covered in life and color diving like Campbell River or Race Rocks. It’s still awesome though. There are tons of rockfish and lingcod to visit, and I seem to recall seeing tiger rockfish on every dive. There are lots of cool nudis, crabs and sea stars too. When the visibility is good the topography of the sandstone rock (especially at Flora Island) is incredible. I also saw a huge adult yellow eye rockfish there! It’s pretty similar life to the shore dives north of Nanaimo (Madonna Pt) with better structure, more fish and a boat! It doesn’t have the wow factor like the other locations on the island but is is still really really pleasant, and the lodge is awesome. Plus the owners Rob and Amanda are the nicest people ever.

Derek, great shots! The second one with the diver in the background is super cool

Quite an adventure Derek! Thanks for sharing and the awesome action shots.

I went up there two years ago for the Sea Lions in January. We didn't get the snow and below freezing temps but boy did we get wind! I did the longer stay for 5 days and we didn't dive for at least 1 and 1/2 days on the trip. Maybe we did 7 or 8 total dives. The first dives in the morning are when the Sealions are the most frisky, so some of the other dives can be a bit of a wet blanket. But when the action is hot it is really fun. The photography is challenging for sure and I lost a few optical cables along the way.

When the winds were really blowing we did some hikes and a when shooting photos of birds. Lots a Eagles, various sea birds, etc. It's a lovely place but it sure is sporty in the winter time.
Last edited by dlh on Wed Feb 05, 2020 12:16 pm, edited 1 time in total.
Dave
Top