The forecast did mention westerly winds for Sunday. Nevertheless, few hardy souls did show up at the Little North Beach in Deception Pass State Park. The wind did stir up the waters pretty much and we were rewarded for our effort with bad visibility and quite a surge while down there, "Under the Shadow of the Bridge. But it was nice to see friends again, and the weather above turned nice too after the morning marine layer burned off. After the dive I hiked around to enjoy the tidal theater when the water runs opposite direction of the wind...

Tuesday June 25th. The westerly wind subsided, the sun was shining and Deception Pass calling.
Two of us answered the call and were rewarded with good visibility, gentle currents and thus great dive. Far cry from the Sunday mess. 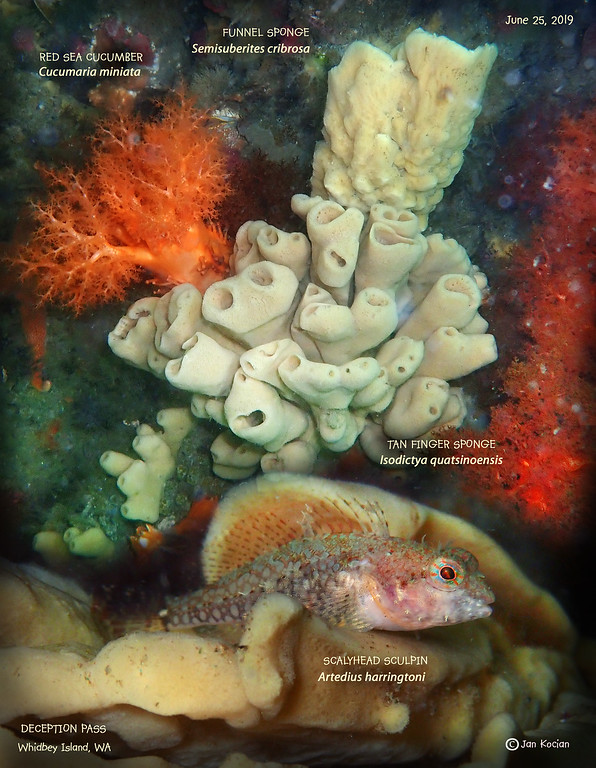 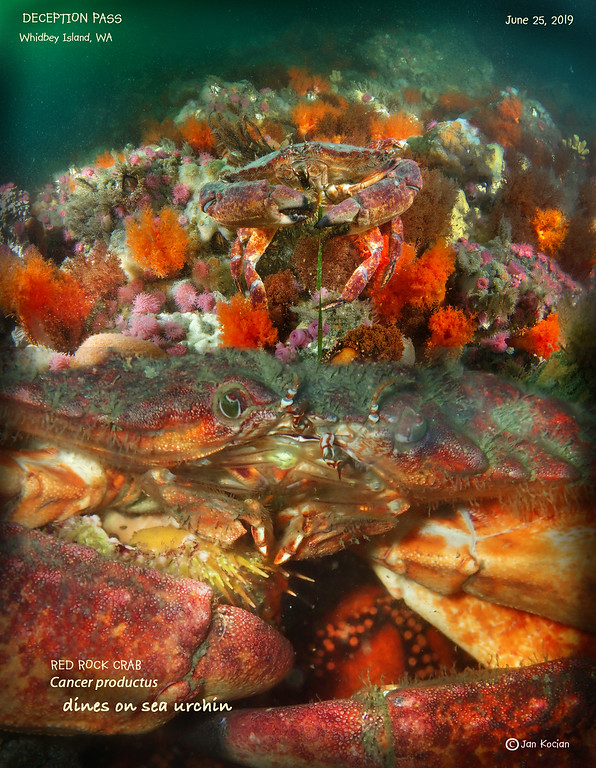 Few more from the Tuesday dive at the Pass. 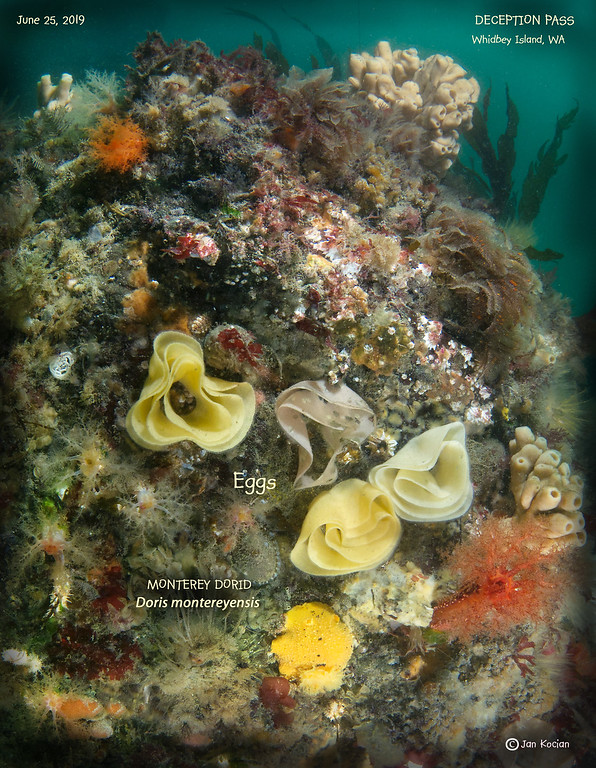 Wednesday dive at Deception Pass. I was surprised to see woman on paddle board floating along the shore close to the bridge where I was trying to get some pictures of Bull kelp. It shows that the beauty Pass scenery can be enjoyed in many ways. Underwater, I felt sorry for the Great sculpin, plagued by so many parasites...

The windstorm of December 2018 completely remade the scenery of Driftwood Park, affecting the two ponds especially. Technically, the wood covering parts of the surface of the ponds, which for decades rested on the shores above the beach is not log jam in the real sense of the name, since it is not restricting a flow of the river or creek. It moves from one side to other depending on the direction of the wind. But swimming beneath and along the edges does feel like being in the jam

There is some life under all that floating wood.

First day of July, checking on sea stars at Langley, one of two places on Whidbey Island where they are still found in large numbers. Visibility in shallower water is still deplorable, but under the thermocline and the miso planktonic soup, I find majority of stars still healthy. It is nice to find that the juvenile Sunflower stars, all nine of them, are still OK. However, pile of goo left from wasted stars are still here and there as a reminder that not all is well in the underwater world...

And from the weird critter department: Two Headed Plumose Anemone and White Crusted California Cucumber. And Painted Greenling watching me from behind a rusty shackle. He probably thinks - I am the weird one. Who else dives in red coveralls ?

Another pushcart trip down and up the forest road. In spite of poor visibility underwater,
saying hello to my fish friends is always worth the effort.

Monday July 8, Skyline, Fidalgo Island. The world above - beautiful, sunny day. Underwater, little different story.
Ten feet visibility and the slack was forty minutes or so late, so current was an issue...

Love the warbonnet almost all the way out of hiding! I had the same problem Sunday with the late slack in Anacortes, but it was still nice. Cool grunt sculpin also.
Party underwater
Top

Tuesday July 9. Deception Pass. Not the best current predictions according to tables, but the weather is nice, so why not try. Visibility was not that great, about twelve feet and the slack was shorter then usual, but I really like this place.

As I exit the water, I find few dead Pacific Sand Lance fishies rolling in the surf... Some worms from my recent dives. Not everybody's favorite critters, but I am sure they have part in the bigger picture of things.

Returned from car trip to California, managed to squeeze in two days of diving at Anacapa Island, part of the Channel Islands National Park. Some strobe issues involving Olympus FL-LM3 flash, which sits on top of the camera inside the housing. It quit on me again, this was already second replacement, and in service only few weeks, so I though I was OK. Well, this little pice of equipment when it fails, makes the two larger and expensive strobes outside the housing useless. They don't fire neither. I did bring along another one, but it was waiting for me in a motel room on shore for the second day of diving. It quit at the end of second dive, not all was wasted, and on the third dive of the day I stayed shallow as to use ambient light. I did enjoy seeing critters I don't see on my Whidbey dives. But I was surprised that in spite of being protected area, there were few fish milling around. I remember seeing schools in the old days (film and younger age), and water felt very cold, us diving in rental wetsuits. The crew of the Specter were professional and helpful , although the dive briefing were good, on promises of marine life waiting for us overly optimistic. Never saw the huge schools of fish circling around, the 50lbs lobsters crawling in the open, or the Giant sea bass. Visibility also varied, not great during our two days there. The marine layer hanging over us until the end of third dive did no help. But it was nice to change the underwater scenery, if only for couple days. Maya was, as always, great dive buddy.

Conditions may have been sub-optimal, but you still find interesting things to photograph. Treasure your dives with Maya. I miss diving with my sons.
-Curt
Happy to be alive.
Top

Yes Curt, diving with Maya is a special treat for me, since it doesn't happen that often ...


The discovery tour in the new underwater realm continues. What is an routine sighting of a common critter for the locals, is exciting new critter of wonder for us. Maya gets credit for the closeups photos while I try to capture the scene these critters live with my wide angle setup.

Those blue banded gobies are so pretty!
Come to the nerd side, we have pi!
Top

We did not find many nudibranchs this time, but the Spanish shawl is a beautiful one 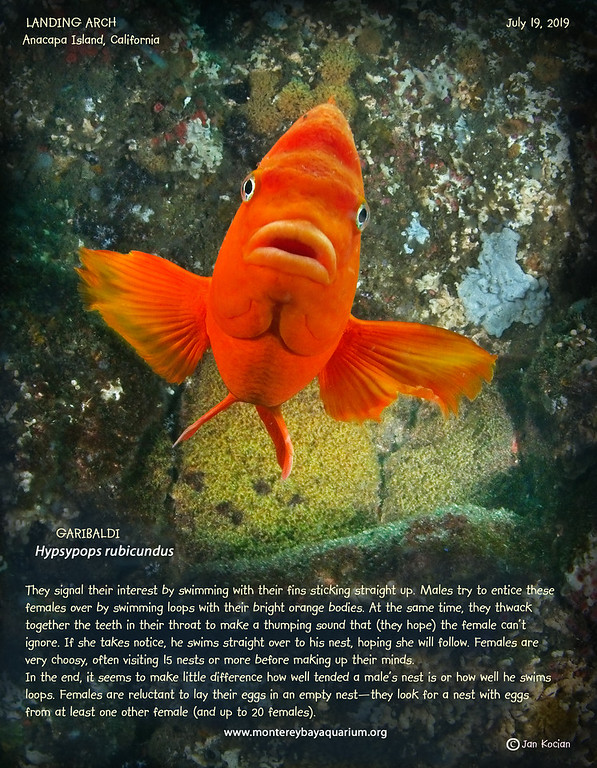 Sea hares. They are big, they are not rare, but it took a trip to California to see them with my own eyes !
It is never too late...

Miscellany from the last day of diving at Anacapa Island.

The dive at the "poster child" of Channel Islands National Park - The Arch Rock" on the eastern end of Anacapa Island was rewarding . Gorgonians are another sight absent in waters of Whidbey Island. This concludes our excursion into the California waters . I wish I had my drysuit, for three dives in a row are too hard on this old body of mine

Nevertheless, it was all worth it...

Back in the home waters. First dive since California. Where else? Deception Pass! 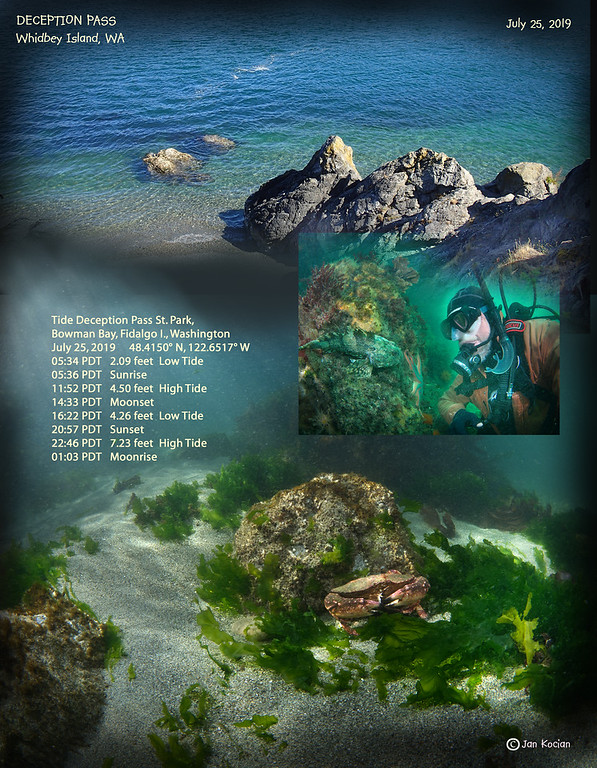 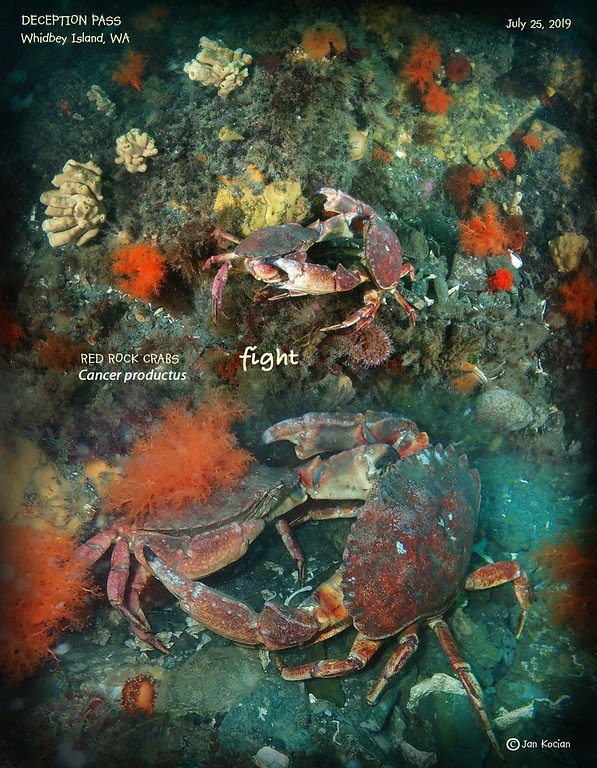